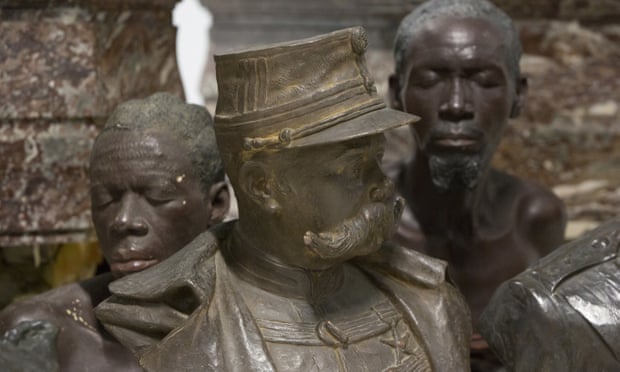 The reopening of Belgium’s Africa Museum, a former colonial institution holding one of the world’s largest collections of African art, has led to calls by the Democratic Republic of the Congo for many of its artefacts to be repatriated.

Joseph Kabila, who has been in power in DRC since his father’s assassination in 2001, said he was seeking to bring back art and documents so they could be held in a new Congolese national museum being funded by the South Korean government.

Belgium’s Africa Museum is located in Tervuren, on the outskirts of Brussels, near the site where a “human zoo” of 267 Congolese men, women and children was staged on the orders of King Leopold in 1897. It has been closed for five years to allow for a €75m (£67m) renovation and “decolonisation” process.

The institution, whose 11,000 sq ft of exhibition space is now double what it was, is reopening on Saturday in the presence of Belgian and Congolese dignitaries, to tell the story of Africa and its colonisation through the eyes of Africans, with a “very critical” view of the racist and cruel Belgian regime in Congo.

In an interview with the Belgian daily newspaper Le Soir, Kabila said he would be seeking restitution of works and documents next year. “It’s in progress, but to do so we are waiting for the end of the works and the opening of our own museum, in partnership with South Korea,” Kabila told the paper.

“We will also rehabilitate our museum in Lubumbashi. The request for restitution will obviously be on the table. One month before the end of the work, which is scheduled for the month of June, there will be an official request.”

Kabila has remained in power despite his second term ending in 2016. He is backing his former interior minister Emmanuel Ramazani Shadary in long-delayed elections in December. Observers describe Shadary as a political non-entity who will be easily manipulated by Kabila.

Initially called the Museum of the Congo and more recently known as the Royal Museum for Central Africa, the newly renamed Africa Museum has been radically remodelled after nearly a century in which its permanent exhibition barely changed.

Guido Gryseels, the director general at the museum, who has been masterminding the changes, told the Guardian he was open to the return of works, but it needed to be clarified as to what was legally or illegally acquired during Belgium’s hold on Congo between 1908 and June 1960, when the country won its independence. It had been a personal colony of King Leopold II from 1885, after which the state had taken over.

He said: “I was in Congo last month and I expected that question to come next year because there is currently no museum in Congo. They don’t even have a storage place and the director told me himself and in public that his priority was to conserve the collection that they still have.

“There are 85,000 artefacts in Kinshasa, stored in rather in difficult conditions, not more than a barn actually. But of course the Koreans are currently building a new museum, that museum is opening next year and that will change the situation.”

“Clearly if Congo asks at that moment for return of some objects, I am certainly willing to consider that,” Gryseels said. “It is not normal that 80% of the African cultural heritage is in Europe. It is basically their culture, their identity, their history. We need to have a very open attitude. The question is under what conditions. How do we define what was legally acquired and what was not legally acquired?”

He added: “Initially they talked about military occupation, military raids and plundering and all the objects coming from that. Now they are talking about everything that was acquired during the colonial period. But was all that illegally acquired or not? We need to do some more work on that.”