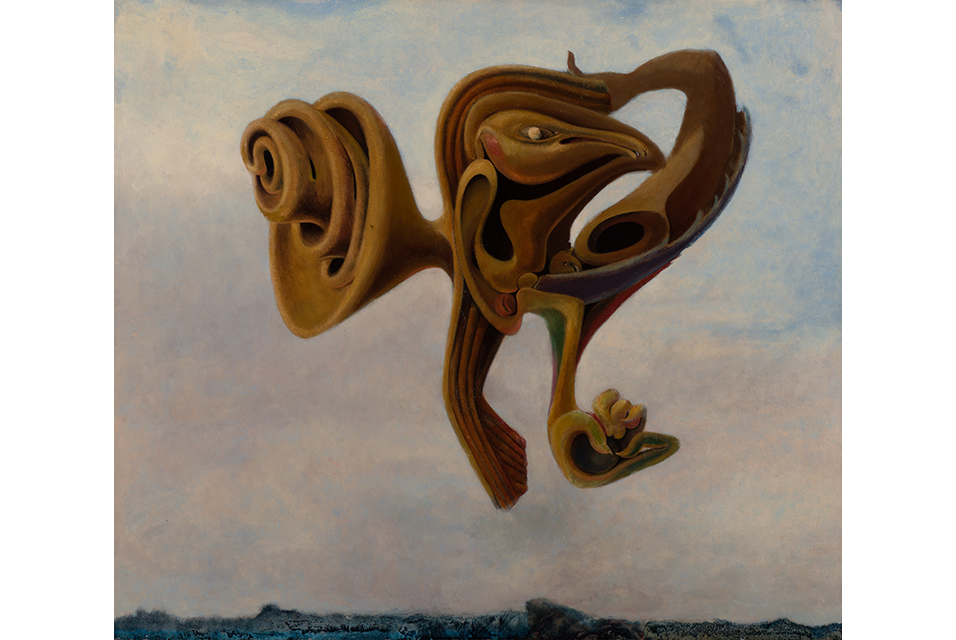 Exhibition celebrates the intersection between Yup’ik masks and Surrealism

NEW YORK, NY.- Moon Dancers: Yup’ik Masks and the Surrealists (April 27 – June 29, 2018) celebrates the fertile creative intersection between 19th and early 20th century Yup’ik masks from the central Alaskan coast, and the Surrealists’ indefatigable quest for spiritual and artistic connections with premodern societies all over the world. The exhibition is organized by Di Donna Galleries in collaboration with Donald Ellis Gallery, an internationally renowned specialist in North American Indian art, and with major loans from the Calder Foundation, the Charles and Valerie Diker Collection, Lucid Art Foundation, The Pierre and Tana Matisse Foundation and important private collections.

Moon Dancers: Yup’ik Masks and the Surrealists brings together a curated selection of important Surrealist paintings and sculptures alongside 16 rare Yup’ik masks, many of which were owned by Surrealists André Breton, Enrico Donati, Robert Lebel, Matta, Kay Sage, and Isabelle Waldberg. The exhibition features works by Breton, Donati, Matta, Sage, and other artists including Max Ernst, Joan Miró, Victor Brauner, Yves Tanguy, André Masson, Wolfgang Paalen, Kurt Seligmann and Leonora Carrington to demonstrate remarkable connections between Surrealism and Yup’ik masks in terms of stylistic innovation, and an attachment to the mystical aspects of nature and notions of physical transformation.

The Surrealists’ interest in Yup’ik masks first took seed in 1935, when an exhibition at the Galerie Charles Ratton, Paris featured a number of masks and ivories from Alaska and the Pacific Northwest. According to Dorothea Tanning, the Surrealists’ fascination with Yup’ik masks accelerated in New York City during World War II, after Ernst introduced his friends Breton, Donati, Lebel, Lévi-Strauss, Matta, Sage, Seligmann, and Waldberg to the gallery of Julius Carlebach on Third Avenue. Carlebach’s shop featured an eclectic array of Alaskan and Pacific Northwest objects; it was, in the words of Lévi-Strauss, a veritable “Ali Baba’s cave” that triggered enthusiastic discussions and studies of Alaskan and Pacific Northwest cultures as well as an energetic buying spree.

The highly animated and symbolic Yup’ik masks were carved from wood and adorned with organic matter including feathers and quills. In their original context, the masks were worn during rituals performed during long, dark, winter nights. They connected the wearer with the animal world on a sentient level, during theatrical and elaborate entreaties to the spirit world for bountiful hunts in the warmer months to come. In the masks, the Surrealists identified correlations to their own work under the umbrella of a broader Surrealist project, which involved unharnessing the conscious mind from the parameters of modern European society and tapping into a universal “poetic energy” fueled by subconscious thoughts and dream imagery. When Carlebach, eager to nurture the Surrealists’ interest in North American artifacts, introduced the group to a curator from George Heye’s Museum of the American Indian (now part of the Smithsonian Institute’s National Museum of the American Indian), the Surrealists carpooled to the museum’s Bronx warehouse to select masks and other works from the museum’s vast inventory, carrying them back to France as treasures after the war.

The Surrealists maintained a long engagement with objects from all over the world as part of a quest for poetic connections among various forms of expression, separate from ethnographic context. Yup’ik masks in particular captivated the Surrealists for the arresting power of their physicality and spiritual content. The idea that a mask could signify a common soul in both human and animal form, as it existed in Yup’ik culture, had been adopted by Ernst in his iconic alter ego, Loplop—the “bird man” that represented the artist in animal form. Kay Sage directly incorporated Yup’ik imagery into her own work, producing tarot cards featuring an asymmetrical mask evoking the split identity demonstrated by many Yup’ik masks as well as a card based after a Yup’ik crane mask she owned. The assemblage technique, specific animal motifs, and distortions of perspective used in the construction of Yup’ik masks are akin to strategies used in specific works by artists such as Brauner, Carrington, Magritte, and Miró, which will be featured in the exhibition. Though they did not travel to Yup’ik territory, Paalen and Seligmann went so far as to travel to the Pacific Northwest and Alaska, producing works directly inspired by their experiences. Paalen developed a new Surrealist ideology influenced by the consciousness of cultures in those regions, which ultimately led to a break with Breton.

The exhibition is accompanied by a fully illustrated catalogue containing an introduction on the subject of the Surrealists’ collecting practices, a scholarly two-part essay on the masks and the Surrealists’ engagement with them, color plates with catalogue entries, and ample archival material documenting this rich art-historical narrative.