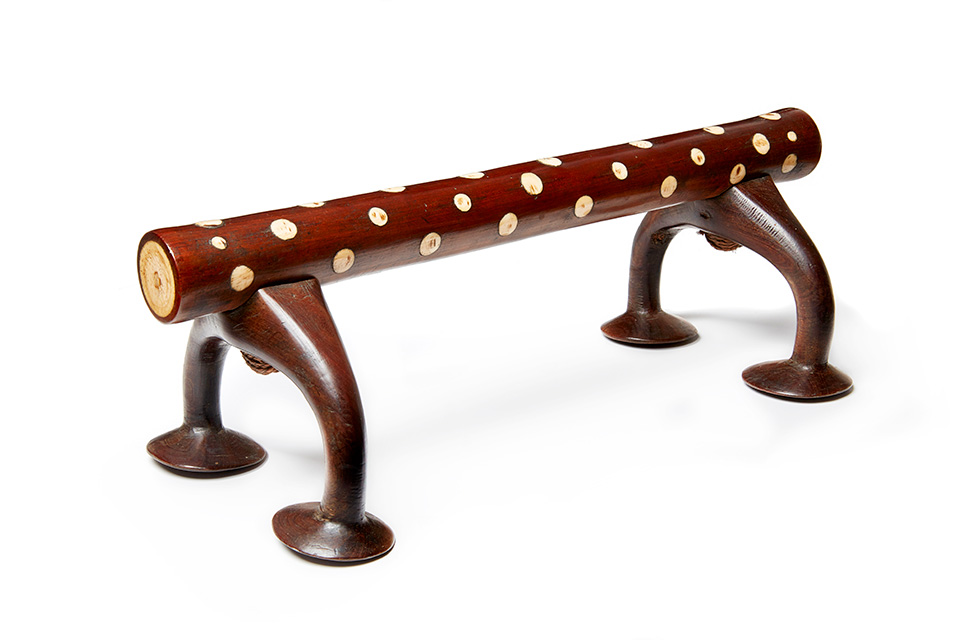 LACMA opens the first substantial exhibition on the art of Fiji to be mounted in the U.S.

Fiji: Art & Life in the Pacific was organized and curated by Professor Steven Hooper, Dr. Karen Jacobs, and Ms. Katrina Igglesden at the Sainsbury Centre in Norwich, England, where it was on view October 15, 2016–February 12, 2017. The exhibition has been reformatted for the presentation at LACMA, with additional major loans from U.S. collections. The exhibition at LACMA is curated by Nancy Thomas, senior deputy director, art administration and collections at LACMA, with support from the organizing curators.

“LACMA is pleased to collaborate with Professor Steven Hooper and his colleagues from the Sainsbury Centre, Norwich,” said Nancy Thomas. “Research for the project was informed by over 40 years of collaboration with Indigenous Fijian and international scholars and support from the UK’s Arts & Humanities Research Council and the Fijian government, resulting in this deeply researched and comprehensive exhibition.”

Fiji: Art & Life in the Pacific is presented in the Lynda and Stewart Resnick Exhibition Pavilion, a major expansion of LACMA’s campus made possible through a landmark gift from trustee Lynda Resnick and Stewart Resnick, the philanthropists and entrepreneurs behind The Wonderful Company and FIJI Water. Since the Resnick Pavilion opened in 2010, its reconfigurable galleries have hosted nearly 50 significant exhibitions covering a diverse cross-section of art history. FIJI Water is the presenting sponsor of the exhibition.

“It’s an honor to be able to share the beauty of Fijian arts and culture through this stunning exhibition,” said LACMA CEO and Wallis Annenberg Director Michael Govan. “We’re pleased to present this show in the Resnick Pavilion, which has become the heart of LACMA’s campus. I’m deeply grateful to Lynda and Stewart for their commitment to bringing this important exhibition to the U.S., and for their incredible legacy benefiting the larger cultural community of Los Angeles.”

“Fiji holds a very special place in our hearts, and Stewart and I are gratified to support this exhibition,” said Lynda Resnick, vice chair and co-owner of The Wonderful Company. “It is our hope that these works from across the archipelago will help visitors fully appreciate the country’s magnificent culture.”

Following the presentation at LACMA, the exhibition will be on view at the Peabody Essex Museum in Salem, Massachusetts, from September 12, 2020 through January 3, 2021. FIJI Water is also presenting sponsor of the Peabody Essex Museum presentation. In addition, generous support from FIJI Water funded the construction of the drua and its transportation from Fiji to Los Angeles.

Consisting of an archipelago of more than 300 islands, Fiji’s landscape is rich, with fertile soils on most islands providing ample food crops and lagoons with extensive reef systems supplying fish and shellfish. The local environment produced the majority of materials represented in the exhibition, including a wide variety of timbers for housing, canoes, and weapons; plant materials for textiles, mats, roofing, ropes, and bindings; clay, bamboo, and coconuts for containers; and shells and other marine materials for adornments.

Fiji: Art & Life in the Pacific showcases the range and quality of these artworks from the past two centuries and highlights the skill and creative adaptability of the artists and craftspeople who made them. The exhibition presents these artworks in eight thematic sections, including: Voyaging, Fiber and Textile Arts, Warfare, Embodying the Ancestors, Adorning the Body, Chiefly Objects, Respecting the Ancestors, and Fiji Life. The later section illustrates 19th-century Fiji with 22 remarkable photographs including studio portraits, landscapes, architecture, and other features of daily life.

The first section, Voyaging, focuses on the role and implements of travel by sea. Nearly 3,000 years ago, explorers likely from the current region of Vanuatu, undertook a 500-mile voyage before settling in Fiji. Subsequent migrations took place, with voyagers settling on the two main islands Viti Levu and Vanua Levu, while others inhabited outer islands where canoe transport was essential. In the 18th century, immigrant Samoan and Tongan canoe builders working for Fijian chiefs introduced a new Micronesian-style rig which led to the development of massive double-hulled canoes in the 19th century, often measuring more than 100-feet long. Fast-moving canoes were used for regional transport and for fishing, while spears and nets were the main fishing methods in Fiji in the 19th century. In addition to fishing equipment, this section features a contemporary drua (double-hulled sailing canoe). Without a fixed bow or stern, drua can sail in either direction by adjusting the mast and sail. They provided open-ocean transport and troop transportation in times of warfare. The drua featured in LACMA’s exhibition was commissioned as a heritage project in Fiji to encourage the retention of canoe-building skills. It has no metal components and is made from local timber with coconut-husk-fiber lashings, shell decorations, and a pandanus-leaf matting sail.

Fiber and textile arts were and remain today a significant aspect of Fijian culture. Masi is the Fijian word for the paper mulberry tree as well as for the cloth made from its inner bark. To produce it, the bark is stripped from young tree saplings and the inner bark is separated and soaked in water. The bark is then beaten into thin sheets, layered and folded and joined to make cloths of any size. Masi can then be decorated by stenciling, rubbing, or painting. Large presentation cloths have been made for investitures, weddings, or state gifts. A striking three-piece barkcloth attire, an example of which is on view in this section, could be worn by both men and women on important ceremonial occasions. Other textile arts included elaborate woven mats, which could be used as prestige gifts; as well as rectangular baskets and fans which showed off virtuoso weaving techniques and served as popular exchange items.

Warfare was frequent in Fiji until the mid-19th century and the country continues to maintain a proud martial tradition. More than weapons, Fijian clubs and spears are ritual objects and expressions of supreme carving and military skill. The multiple clubs on view in this section represent the widest range of their design. A club or two was the expected accoutrement for active Fijian men, and pomp and display were important aspects of military action. Combat was traditionally preceded by vigorous parading, performance, and boasting.

A section of the exhibition is dedicated to works embodying the ancestors. While it seems that figures were not worshipped as deities, they were kept in temples and shrines as embodiments of deified deceased individuals, usually ancestors. Figures from the 19th century are rare from Fiji, with just a few dozen examples, some preserved in Fiji Museum, Suva. There appear to be two basic figure types, standing figures with bases or pegs, and those incorporated into hooks used for suspending offerings. This section features one of only three known surviving double-figure hooks made of whale ivory, collected in 1876 by the first resident British governor of Fiji, Sir Arthur Gordon. Field reports refer to such hooks as “the most revered of all objects.”

Adorning the body was an aspect of Fijian ceremony and expression and included necklaces, pendants, and other precious wares. Key forms of personal ornament shown in this section are whale-ivory and pearl-shell breastplates, valued for their subtle design variations and alluring reflective and color properties, which were suited for chiefly wear. Fijians themselves did not hunt whales, but obtained teeth from sperm whales stranded on local reefs and beaches and from European traders in the 19th century. As a result, whale ivory was the basis for many other forms of “valuables,” retained or gifted at events or occasions of social exchange. Sperm whale teeth were sawn vertically and horizontally to produce thin “tusks” which were strung closely together to create striking necklaces.

The section on chiefly objects highlights the tabua, the most significant Fijian valuable. Made from a sperm whale tooth that had been oiled, smoked, polished, and fitted with a coconut-husk fiber cord, it is presented as a gift on important occasions. At such occasions, the donors and recipients hold the tabua in their hands and make formal speeches to acknowledge the participants and explain the purpose of the offering. For Fijians, whale teeth were symbolically associated with the cosmological power of the sea and of chiefs. This section also examines the cultural importance of yaqona, an important drink known generally in the Pacific as kava. The pounded or powdered root of a species of pepperbush is mixed with fresh water in a large wooden bowl, then served with respectful formality to guests in coconut-shell cups. Though yaqona is nonalcoholic, it has relaxing properties and is still consumed by Fijians formally or socially on occasions when relatives or friends gather. Other forms of chiefly regalia are showcased in this section, including finely carved clubs and elaborate headrests.

A number of works in the exhibition provide insight into traditional Fijian Life. This section highlights implements for the making of masi, an adze for cracking of ivi nuts, a bamboo tube for the transportation of water, and an end-blown trumpet for multiple forms of communication. A key domestic object was the bar headrest, made of single or multiple pieces of wood, which offered air circulation and protection for hairdos on tropical nights for sleepers reclining on woven mats. Other works in this section include pottery such as elaborate multi-chambered vessels that often took the shape of natural forms including turtles or citrus fruits. They were rubbed with hot resin from dakua trees to achieve a glossy varnish.

Religious observance in the early 19th century focused mainly on divine ancestors to whom temples were dedicated rather than creator gods, as found in many other areas of the world. In Fiji there was a direct correlation between divine power and phenomena that affected human life, such as rain, drought, crop fertility, and especially illness. Accordingly, there was a very practical aspect to Fijian ritual, which involved prayers, chants, sacrificial offerings, obeisance, and other forms of worship in order to please the gods and elicit from them desired outcomes. The section Respecting the Ancestors features model temples which duplicate the architecture of full-scale temples and were possibly taken as portable shrines on canoe voyages. They are made of great lengths of coconut-husk-fiber cordage and their elaborate construction was a form of sacrifice and skilled sacred work. In pre-Christian ritual, yaqona was made in concentrated form for consumption by priests, who sucked it through a reed tube from a shallow dish, some of which had elaborately carved pedestals. A wide range of these dishes are included in this section, along with rare anthropomorphic bowls presenting human or animal-like characteristics.

The exhibition also presents a remarkable display of period photographs from Fiji. Nineteenth-century photographs of the Pacific were produced by foreign travelers, commercial entrepreneurs, and professional photographers, most often men from New Zealand, Australia, Canada, and Britain. Works in this section come from LACMA’s extensive collection of Pacific photography, which includes several hundred photographs, albums, cartes-de-visite, and stereographic photos of Fiji. Many images are examples of staged studio portraiture—they capture traditional dress, weapons, and hairstyles, yet impose a colonial perspective on the sitter. Additional images document landscapes and architecture or feature aspects of daily life. As photo archives are digitized and more widely shared, it is anticipated that continuing research will help others find the relatives of original subjects, to reclaim details of lost traditions, and to communicate the rich history of the region.